I obviously like March Tilton’s designs, and as soon as I saw this Vogue pattern, I knew that I needed one.

In general it is quite an easy dress to make. This version was made with a combination of the sewing machine and overlocker, and I followed the pattern rigorously, because it struck me that if I didn’t, I could end up in a mess. The good news is that it shortens from the bottom, because it is quite difficult to get a feel for the fit until it is almost complete. Having cut Marcy’s designs before, I knew that the overall dress would fit OK (and it does), but I thought it was looking a tad long. In the end I cut off about 2″, which isn’t as much as I was expecting.

The challenges were not really in the construction, although stitching in the ditch around the neckline took a bit of concentration to do it accurately. The main challenges were to find three similar weighted fabrics that would work together, and then, the biggest challenge, what thread to use on each part of each seam? This was particularly difficult around the neckline which uses all three fabrics. I plumped to match the salmon colour in the end (with a sort of  ‘matches anything light’ shade of beige), but had a bit of re-work to do when I caught the brown and had to unpick. Many wouldn’t have bothered! 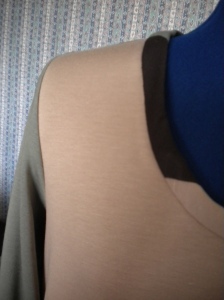 Just to add that it lies flatter on me than it does on my dress form. The fabric came from Barry’s and the total cost of the dress was the princely sum of £15. Not bad for something rather unique!

I stitched the hem, by hand, as instructed, with two different threads. 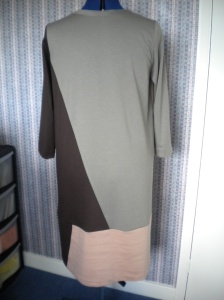 Each piece is unique, and it was all cut from a single layer of fabric (x3). With one exception, I even followed the cutting layouts. The exception was the brown fabric, where I discovered that I had read the wrong line of the requirements table, and bought 30cm too little fabric. This was never going to be a problem, as I had plenty of the other two fabrics left, but with a limited amount of juggling, and no real squeezing of the layout, I re-arranged the brown parts, and managed to get the second sleeve out of it. The second sleeve would have been khaki if that had failed! So, the news is, that you can cut the dress out of less fabric than it says on the envelope, and thus save a bit of money!

There is a usable pocket on the left hand side.

From some angles it does look a bit like a maternity dress, but it isn’t. Having said that, it will be easy to wear mid season, with shoes that don’t get much wear these days as so much of my winter wear is grey…. So this makes a change.

Marcy doesn’t say this, but you could easily use the pattern to make a tunic, just by omitting the two part lower sections.

But will I use the pattern again? Maybe not. I’m not sure that a wardrobe needs more than one of this dress. There are a limited number of places where I can wear it, and a very limited number of coats / jackets that will work with it. Although I have shoes that will work with it, I can’t walk far in the shoes, so that will also limit its usability. There is a matching cardi with the pattern. I nearly bought some brown fabric this afternoon to make the cardi, but then I didn’t. Again, it will be a huge challenge to find something that works with all three fabrics, unless I actually use one of the fabrics, and that will impact the colour blocking effect. And as I found out this afternoon, Barry’s have sold out of the khaki version and may not be able to get anymore. This is great news for preserving the uniqueness of the garment, but rules out one cardi option.

Something more to think about……..