You know how it is when you go into a fabric shop for one thing, and come out with not only what you went in to buy, but other fabric as well. This is very much a case in point, although I did happen to take the pattern with me just in case.

So this is the free pattern from Love Sewing Issue 17. I don’t need any more tops, but as you can see, I found some beautiful fabric and had to buy it. It came from Guthrie Ghani. Indeed, I took it home, washed it, and because it was a hot day, it dried in no time, and then it was cut out before lunch.

I made the whole thing on the overlocker in round about 2 hours, and a lot of that was spent getting the bands evenly attached. I actually tacked the neck band first, although I suspect it wasn’t necessary. The others, I pinned carefully and evenly and then straight into the overlocker. Done!

I like the waist band and the sleeve bands, but I am not sure about the neck. I know that it is meant to ‘slouch’, and given slightly narrow shoulders, maybe it slouches slightly more than it might. But it bodes well that I took it straight off the ironing board after its final press and wore it, and I haven’t taken it off since I had the photo taken. Just to say that it doesn’t really go with the red trousers, but as I had just done photos for the trousers, I lazily didn’t change for the top photos. Whilst I had a photographer, we did two pictures! 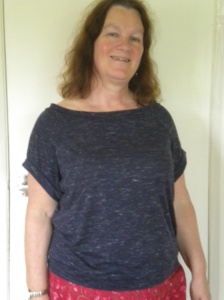