Quite a while ago I read an article, I think in Sew Today, which started something about having bought some blanket fabric on a Thai market and turned it into a coat. I didn’t set out to do the same, but that’s what I have done. I would class this as slow sewing, and it took almost 3 solid days to make, with a delay of a similar length whilst I contemplated how to fasten it.

It wasn’t particularly difficult to make, but there were certain aspects that took some thinking about.

It is significantly based on Vogue 9163.

Just the jacket – not the matching skirt. There is also a longer version, and mine is somewhere in between, solely based on the amount of fabric available. The main difference is that I joined the top and bottom sections together so as to maintain the stripes down the front and back.

I couldn’t do the same with the sleeves for two reasons: 1. the only way I could get the pattern out of the fabric was to cut the bottom sleeve alongside the back, and 2. the top and bottom sleeves did not seem to be quite on the same grain and I wanted it all to hang properly.

I bought the fabric on the Indian market in Bangkok, returning specially on the last day of my trip to purchase. I did ask the origin of the fabric, and with much language difficulty, I was told ‘Japanese’. This was an unexpected answer, but shortly after leaving the shop I realised that that the person who gave me that answer could well have been Japanese himself, and hence had misunderstood my question – thinking I was asking where he was from, rather than the fabric. I suspect it’s Indian, but I will still refer to it as my Thai coat.

I cut a 10cm square and did a wash and shrinkage test. Much to my surprise, no colour ran and there was no shrinkage. So it would appear to be washable, although it will take ages to dry. The fabric frays easily, so I overlocked all of the edges before I started. This will help strengthen all of the seams.

The next problem was to work out how to cut the pattern out of the 3m that I had bought, along with contemplating the matter of pattern matching.

The four fronts – outer and lining, were all cut from a single layer. This shows the lining. I know its the lining, because I matched the pattern, BUT, although I thought I was thinking carefully, one of the lining pieces is cut on the wrong side. Hopefully only I will notice this…… There was no spare fabric to fix it. I have used every inch.  The inner hood lining matches up beautifully.

The front lining is fully interfaced. I think it’s the first time that I have ever bought black interfacing (on Leeds market). The back and sleeve lining is rather smart, being Jaeger, and hopefully good quality – it feels it, from Fancy Silk Store in Birmingham, and actually more expensive than the outside fabric.

As is frequently the case, I did not make the coat in the order as prescribed by the pattern. Noting in particular a comment on the SewDirect web site, that the sleeves were a bit wide, I made up the lining first, as that would be easier to alter. The sleeves are fine for me as per the pattern. You need room in the sleeves of a warm coat as it is likely I will be wearing thicker clothes underneath. I wouldn’t have noticed anything if I hadn’t read the comment.

The inside half of the coat finished.

Note that I tacked a lot of the markings so that they can be seen from any angle. You wouldn’t know that one side was the wrong way round, would you?

Next I did the pockets, as it would be easier to stitch them onto unattached front sections. They were specifically cut to line up. You have to look carefully to see it!

Then I made up the rest of the coat, leaving them to hang for a while so that they would be comfortably stitched together. 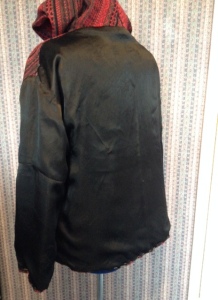 After which it took me nearly as long to decide how to fasten the coat, as it did to make up all the parts. I had a similar problem with my recently completed boiled wool jacket (which I am enjoying wearing…). In fact, although I consider myself to be a reasonably competent sewer, I could do with some help concerning button holes, especially for heavier weight lined garments. I discussed this on a visit to Guthrie Ghani today. We’ll see what happens. I practiced a machine stitched button hole through 2 layers of fabric.

This was the solution with the boiled wool jacket – BUT, boiled wool is a very dense fibre. This has quite an open weave, and however close the stitches are, I felt that there was a risk of there being loose threads, which would basically unravel, as the fabric is quite prone to fray. The right answer is probably a bound button hole (as with the boiled wool), but I don’t know how to finish them tidily when a garment has a lining. I just left things for a couple of days, and the answer came to me whilst driving home from Leeds on Mother’s Day (see waterfall cardie post….) I have used large press studs to fasten the jacket, and then stitched buttons onto the right hand front. This was where the tacked markings really came into there own and ensured all parts were correctly placed.

So, it’s totally wearable now, and will be lovely and warm, but probably not very waterproof. I did wonder whether it needed a 4th button to close up the top of the neck line, but the hood would be very claustrophobic. I have a couple of suitably coloured scarves that will do a good job.

I have not top stitched round the edge, as per the pattern. Given the vertical pattern interest in the fabric, (stripes!) I think that top stitching might have a detrimental impact. The lining is permanently tacked in place at the neck and shoulders, so I think will hold both parts together adequately. I will review the situation after a few wears.

I am pretty happy with this, if only because I am fairly sure that it is unique. I did think about using toggles and loops to fasten it. And with that in mind, maybe I will make something more like a duffle coat another year – or more. A pattern to keep hold of I think, and trust that I don’t change size too dramatically between now and whenever.