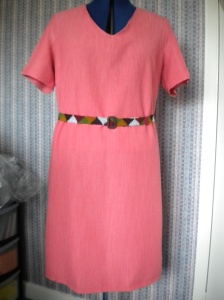 What’s a Ladakhi belt, you are asking? Well, that’s one in the picture. Ladakh is right in the north of India. Most of it is over 3000m high, it has snow and is otherwise known as Little Tibet, having more in common with pre-Chinese Tibet than the Tibetan area itself now. I was there about 5 years ago, and bought the trimming on the market in Manali, with no real plans as to what to do with it. So I made a couple of belts and a choker. I can’t use it as stitched-on trimming because the colour runs badly, but I can use it as some form of removebale trimming. Except that generally I don’t.

The dress is very much a stash-busting dress made from fabric left over from these makes here. I have used the shift dress pattern in GBSB Fabric for Fashion, which I previously used for a linen shift dress. By folding the fabric into the centre I knew that I could just about squeeze a short sleeved dress from it, although I had plans for adjusting the pattern to be sleeveless just in case.

Although coral goes quite well against the backdrop of a blue dress form and my study wallpaper, it doesn’t go that well on me, so the belt is, in fact. the stand out feature, being contrasting autumnal colours!

I adjusted the pattern to give it a straight hem rather than the rounded hem in the book, mainly because I didn’t have enough fabric to make any matching bias binding. I thought I’d do this some time ago, so I already had the zip, which although I say it myself, went in rather well.

In general it’s an easy dress to make. In some shape or form this is the 4th time that I have used the pattern. I had two ‘problems’.

One comment on “GBSB shift dress with Ladakhi belt”