I was told that bra making is addictive….. I’m finding that its not because you need lots of bras, although I guess that one cannot have too many, but because you want to get it right, or prettier, matching this, matching that and so on.

So whilst sourcing the correct elastic for the Marlborough bra, I also bought the toile kit from sewingchest.co.uk, and a different pattern. Kwik Sew 3594.

The bra is a different shape, and the toile kit contains tricot fabric, so the result was bound to be different. But I was pleased that I had made the Marlborough, as I had learnt a lot about the method for making a bra. I followed Marlborough method at the back end of the process for making the straps. 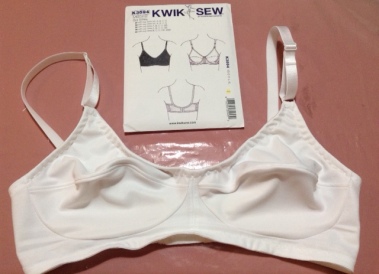 So, quite plain, quite white, looking a bit like a sports bra (but not feeling like it), and fitting well!

I used the overlocker to stitch the two halves of the cups, and to stitch the cups into the frame. With tricot fabric, that part of the process was actually quite easy and there was no issue about finishing the edges of the fabric. The hardest part was stitching the centre seam, as there isn’t much room for manoeuvre. Having just fitted the walking foot, I had to remove it and use a zip foot instead. Whilst stitching most the rest of the elastic with the walking foot, which I don’t use very often, I needed the zip foot again to stitch the ‘hook’ side of the fastening in place.

The toile pack cost me £12.90, and I made a point of only using the contents of the bag. There’s tricot and powernet left for one more bra, but I have used most of the elastic. Luckily I have some stocks from previous purchases. Then there is the pattern which cost me £5.39. but it is highly likely that I will use it again.

I only completed it today, and so far it seems very comfortable and fits well. The challenge now is to make a prettier version. And that will be a challenge because I think I would like to see and touch any sheer and lace before I buy, which means finding a suitable bricks and mortar supplier.

Kellie was right when she said that bra making is addictive (and quite expensive when compared with the price of a bra from Asda, or indeed, Marks and Spencers!)