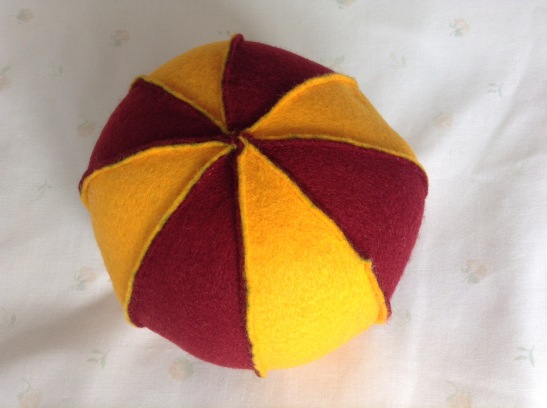 To be clear, in no way am I writing this post to say ‘Hey, I made a felt ball’

I did make a felt ball, from a vintage pattern book. But this wasn’t a pattern book that I found in a charity shop or on eBay. I found it in my own pattern collection. 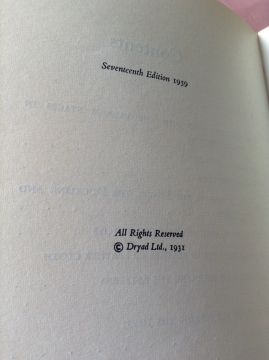 So it looks as if it was originally published in 1931, and I have the 1959 version. I probably didn’t have a pattern box in 1959, but I may well have had a box labelled ‘Ann’s felt toys’. Somehow, in the course of the last 58 years (actually, I’ve had the book for ages), it made its way from Mum’s pattern box, to mine. But the patterns themselves didn’t. It was only about two months ago that Mum produced a bag of felt bits, and suggested I could make more use of them than she could…. And it was only at the weekend, whilst vaguely thinking that I could maybe make some old fashioned toys for Baby H, (my nephew’s soon to be born child) that I dived into Mum’s old bag of felt bits, and found the pattern pieces, many of which had been neatly cut out and mounted on card. I had no idea that there were pattern pieces in the bag. I was looking for scraps of red felt for something completely different.

Now I can make toys!

First lesson to be learnt – do not draw round the lovely card backed pattern pieces with a blue marker pen. My fingers are covered in blue ink. Hopefully Baby H won’t get covered  in blue in ink too, as, the ball being felt, I cannot wash it. Secondly, the instructions say to hand sew. I sewed most of it on the machine. It’s not easy to get all of the 8 points accurately lined up on the machine, but I hand stitched round each end twice, and pulled it all together, and then trimmed any excess. And the opening for the stuffing was hand stitched, although I think that careful stitching with a zipper foot would work.

I probably won’t blog the rest of the toys that I intend to make. I just thought that the story of the pattern would be of interest. Hope you think so too.