This entry is dedicated to Caroline @allspiceabounds, and all others who toil to make trousers. Here’s her web link

My post is going to be so remarkably similar that I wonder why trouser patterns are not a different shape, particularly as Caroline looks to me to be a totally different shape to myself, and yet we have made pretty much the same alterations, albeit, to different patterns.

So this year I had a go at Sew Over It’s Ultimate Trousers. I had read so many good things about the pattern, and observe that it is a relatively straightforward pattern, and hence ‘easy’ to alter. I say ‘this year’ because last year I did pretty much the same thing, but had a go at Butterick 5931, supposedly ‘fast and easy’ trousers. 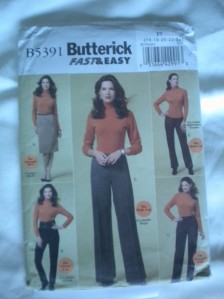 They have a mock fly front and a waistband, actually making alterations harder. I was creating hinges and pivoting delicate tissue paper all over the place, and did eventually get a good fit round the waist and hips, BUT… they were too short! I concentrated my muslin making on just the awkward to fit parts, and assumed that the length would be no issue. I am very much ‘average’ height. With carefully selected shoes, I do still wear them, especially after I had taken chunks of fabric out of the side seams, even though I did the straight legged version.

A few lessons learnt then last year, and I was hopeful that the Ultimate Trousers would be easier, and a totally re-usable pattern. I had many metres are cheap polycotton on hand for muslins.

At which point my adjustments look remarkably similar to Caroline’s! And I thought that I was probably ready to sew for real.

I had bought some grey gaberdine whilst on holiday with the intention of using that for this pattern. But that’s another story which will no doubt follow at some point. In the meantime I found some stretch denim, supposedly ex-designer, at Fancy Silk Store and decided that for this first ‘make’ the addition of stretch to the party might be a good idea. I also decide that the addition of pockets might be a good idea.

I drafted the pockets simply by tracing round the pockets on an existing pair of trousers and taking measurements of its placing on the back of my existing trousers. This seams to have worked well. Of course, the pockets were one of the first things that I had to do, to the extent that I stitched them in place before I had done the back darts. Whoops. So they had to be un-stitched, and stitched back in place, with a big note to self added to the pattern instructions. Of course this was the fourth time that I had made the pattern in about 5 days, so I thought I knew what I was doing – as is too often the case. I have a nice sharp un-picker which is well used!

I also bought a jeans needle to make these, but still decided to try to avoid bulky thicknesses if I could. Therefore I finished both the inside of the pockets tops and the facing with decorative bias binding which I had had in stock for some months. I don’t think I envisaged using it for the inside of trousers when I bought it, but it looks lovely. Having said that, I pre-washed the fabric in the washing machine, so I didn’t see how much colour leaked out. Its possible the binding will be a lovely shade of grey after the trousers are washed. 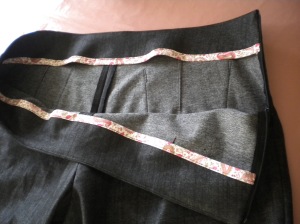 And here is the finished invisible zip. All rather invisible and well joined to the side seam. I followed Tilly’s instructions in ‘Love at First Stitch’. She’s very good at explaining techniques. 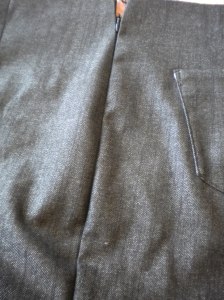 The pocket is also in shot. I finished the top of the zip with a tightly fastening hook and eye.

It’s rare I appear in my blog, but a pair of black trousers hung on the back of a door from a coat hanger are a bit boring to look at, so I got out the phone, stood by the mirror, shot a selfie and cropped. This is the result. My apologies. The whole thing doesn’t look a bit like it says on ‘the tin / pattern envelope!!’.

This was taken before I decided to cut out some of the fabric between the crotch and knee. One is of course cautious about removing fabric from a ‘finished garment’, and I think there may be scope to remove more from future versions. In fact I had a bit of a fight with the overlocker when re-finishing the new seams, but I won, as I always do.

As with last time, I am happy with the adjustments round the waist and hips, although with a relatively low slung ‘waist’, I do sometimes feel that they might be about to fall down. But they don’t. I will get used to them. In fact, they are far more comfortable than other trousers that I own.

The length is great, and there is a bit of room in the hem, just in case I decide that the length is not great after some wear. It is! You can see in the picture.

But I have some questions about future versions.

I only finished the trousers this week. I need to wear them a bit and see how they feel and look, and then work out what more adjustments are needed on future versions, but as a pattern to form the base for a good pair of trousers, I think that the Ultimate Trousers is very useful.

And if you read my blog regularly, and I have been quite prolific at making and blogging recently, you will know that I am going to Australia – next week – to see the tennis. My sewing things have been cleared away, the machine is packed up and ready to go for its service; I have even hoovered the carpet under the sewing table. And when I get back I need to find my next IT contract. Its been a good few weeks, but I’m guessing that it will be at least 5 weeks before I blog again, and maybe longer.

Thank you for reading.