Following on from the colour blocked dress, I now have a colour blocked skirt – or this entry could be known as, how to make a simple skirt difficult!

I hoped I had sufficient salmon and khaki coloured jersey left over from the Marcy Tilton dress to make a skirt from Butterick 3460, a pattern that I have used for casual wear on several occasions. It turned out that the denim skirt that I took to Australia was one of my most worn items. Well, I didn’t have quite enough khaki, so I went off to Barry’s to remedy the situation. They have sold out of khaki and may not get more supplies, so I bought the brown instead, for the sum of £3.00 something, making that the total cost of the skirt, as I already had all of the other notions.

As with the denim skirt, I have added one pocket on the right hand side. I used a cotton fat quarter that had been free with one of my magazines, meaning that the complications arise because I was combining two colours of jersey and cotton, all into one garment.

You can just about see that I have top-stitched in a contrasting colour throughout, meaning that I was constantly changing thread, feet and, to sew the pocket together, the needle as well. When stitching cotton to jersey, I stuck with the ball point needle. It’s all finished on the overlocker. For most of it I just used an ordinary straight stitch, but I used stretch stitch round the waist, as that part will be stretched. I debated using a twin needle round the hem, but for consistency I would have needed to do that in contracting thread, which would have been a real pain to change everything half way round, so instead I finished the hem on the over locker and then just hand stitched it into place. I cut it quite short, so I didn’t want to use much fabric in the hem. 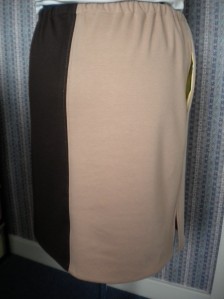 Back view, with pocket and side slit