So I was walking around Leeds market, as I am occasionally inclined to do, when I spotted some great autumnal coloured, slightly sparkly jersey at £4 /m. So I bought 3 m. Its quite unusual that I buy fabric with no real plan as to what to do with it.

Then I recalled Me Made May when I was regularly wearing my Colette Moneta dress, and concluded that the fabric would make a great second Moneta. This one is exactly the same as the first one, in terms of sleeves and collar, as that clearly worked for me first time round. The only really fiddly part is gathering the skirt. I was really pleased with the results on the original, and wanted to replicate the method. I think the key if to stretch the elastic to the fabric in quite short lengths. I sort of machine tacked it, and then once it was fixed, I used the overlocker to firmly finish the join.

Then I left it to hang for nearly 4 weeks whilst I went away! Actually, it hangs very easily, although as is always the case with bias cut fabric hems, getting a level hem involved quite a bit of re-work with the hem marker.

So I had some fabric left out of my 3m…… so I made a long sleeved T-shirt using New Look 6230, which was free with Sew magazine in January.

Luckily I found some more of the same sparkly jersey in Barry’s in Birmingham, albeit slightly more expensive than the same stuff on Leeds market – but cheaper than going all the way back to Leeds to save a handful of £s! So I bought the gold version, and made design B with a rounded neck. The neck is perhaps a bit wider than I would normally wear, but should be OK with a necklace, and I have a suitable necklace. It was all quite easy to put together using the overlocker and finishing with a twin needle. 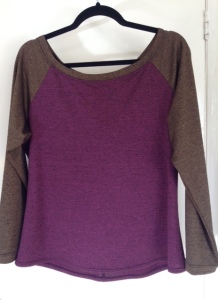 I still have some usable pieces of sparkly fabrics left, so watch this space for other makes – maybe. I will be in Leeds again next week!

2 comments on “My second Moneta”