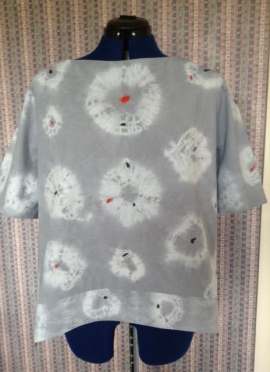 Welcome to a very unique garment. I can guarantee that no one else will create this combination of fabric and pattern, as I designed the fabric myself. Its taken me several weeks, but I hope that I have photographed key stages along the way, such that you might be able to create your own version.

The inspiration is a mixture of things, but primarily driven by the forthcoming trip to Indonesia and the dress that I made a few weeks ago – here. I have a bit of an interest in fabrics around the world, and am reading up about those from south east Asia. So I thought I’d have a go at my own version. Additionally, you might have read my page about the Rajasthan bedspread, which I have never (yet) got round to making, but this brings me a tiny step nearer. I am also aware that some of the sewing community have recently been having their own fabric printed, so this is my way of doing the same thing.

So, this started as a piece of plain white cotton. It had to be a natural fibre, as they take dye better than artificial fibres. And I remembered to photograph it whilst it was hanging on the line after its first wash – the first of many. 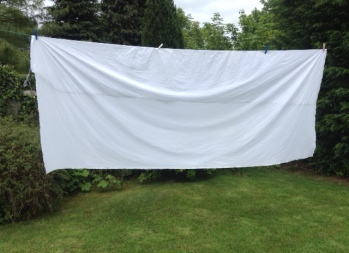 I bought two dyes (sorry its not natural, but right now, that would be a step too far). First I dyed the whole 3m with a light blue shade. And later I used a ‘denim blue’ shade on top of the light blue. As it happens, I did all of the dyeing work outside in the garden, after also deciding that I would also wear the same colour as the dye that I was using, in case of accidents!

Here’s the kit I used: a large plastic bucket placed on a large plastic bag (City of Birmingham garden waste bags have many uses, as you will find out), an old glass jar for mixing the dye, my rarely used weighing scales for weighing the salt, an old wooden spoon and some rubber gloves – I hate rubber gloves – they make your hands smell for the rest of the day, even after sweet smelling hand cream has been applied. 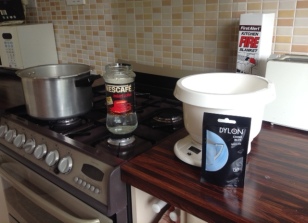 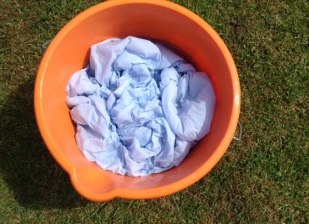 Heating 6 litres of water was a bit of a challenge – hence the pressure cooker, which takes 3 litres, and then several boils of the kettle.

So now I had 3m of pale blue cotton, which stayed that way for some time whilst I thought about the next stage (and waited for another dry day, so that I could work outside!)

The pattern is Vogue 9063, which doesn’t look much on the cover, but I thought made up nicely when shown in Sew Today.

I eventually decided that I should cut the pattern out of the pale blue, and then tie the individual pieces, so that I had a bit of control over the placing of the design on the finished garment – sort of turning pattern matching on its head. But then noting that the pieces would have to go through the washing machine at least once during the dyeing process, I thought that I should also finish all of the edges at this stage, so as to avoid massive amounts of fraying, and thus ultimately distortion of the shapes. I over-locked all of the edges, except the neck lines, which I stay stitched.

So here you can see the individual pieces tied with rubber bands, dipped into the darker dye, and then hung on the line to dry (out of sunlight….. dry on a warm dull evening!)

I basically just left these pieces in the dye for an hour, without much stirring. I decided that it didn’t matter if the dye was unevenly spread; that would all be part of the unique design. In fact, not having done any tie-dye since Junior School, I was a bit concerned that the elastic bands would not have done the job, but, as you can see, they did! The only thing I was a bit disappointed about was the final colour. It wasn’t ‘denim blue’, as suggested on the pack, but a shade of bluey grey, rather matching this summer’s recent skies! That must be the result of having mixed it with a pale blue – the pack does say that combining colours does result in natural colour combinations.

So then I sewed the garment. I cut 5 cm from the back length, so although it is still longer than the front, it is more a tunic length, than that of a short dress, as it would have been without being shortened. The sewing is reasonably straightforward, and I would recommend that you stick with a reasonably stiff interfacing on the neck facing, as that holds the wide shape properly.

So now I have a ‘plain’ tie dyed top, but I didn’t want to leave it that way. 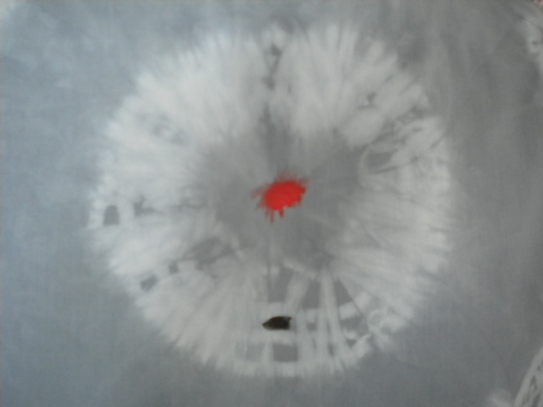 When I was planning for the not-yet-made bedcover, I bought some fabric paints and had a bit of a play with the some printing blocks which I bought in Udaipur, India. I only wanted to add a few small painted highlights, just as ‘pops’ of colour – to brighten up the otherwise ‘dull day’! You can see above that I covered my dress form with another City of Birmingham garden waste bag, and just gently added the colour into the dyed patterns, sort of randomly. I tested on the small piece of fabric sitting on the top of the dress form.

That then dried for slightly over the recommended 24 hours. After that the instructions say to iron the colour in place for about 5 minutes. Well I reckoned that would take me about an hour or so of very boring ironing to cover each ‘pop’ for 5 minutes, but I have read somewhere (no idea where…) that 5 minutes in the tumble drier has the same effect. Thank goodness for that!

I briefly ironed everything to be sure, and you have the end result at the top of the blog. And another use for a Birmingham garden waste bag, which I cut up and used as a base for paint blobs!

So when am I going to wear this? It may end up being what I call a ‘portfolio’ item, like my sari makes. I could wear it around the house, certainly, or whenever I want to create a talking point when I go out – maybe at sewing meet ups!