My requirement is for a simple T-shirt dress for my holidays. I have 3m of pre-purchased fabric from Minerva Crafts, so I expect to get more than just a t-shirt dress out of it.

My dress must fit nicely, which means that I don’t want tight fitting and clingy. I took longer deciding which pattern to use, and how to get the most out of the fabric than the time it took to make the dress. 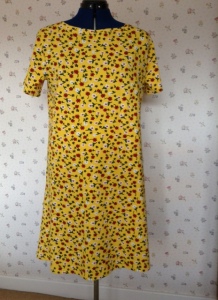 The fabric wasn’t easy to handle. Its the type of jersey that rolls and clings to itself, so 3m of it had to be laid out on the floor – which I don’t like doing. Luckily the design / pattern provides some insight into the position of the grain. Then I realised that the pattern is in vertical stripes, which is great for the grain, (assuming its printed straight…), but may not be brilliant for a cutting layout. I pondered further…

I have a winter-weight Tilly and the Buttons Coco, which is so easy to wear and surprisingly smart. I have worn it for interviews before. So whichever t-shirt dress pattern, mainly untried and tested, that I looked at, I kept going back to Coco. Trouble was, Coco was slightly over half the fabric width, meaning that if I folded the fabric, it wasn’t into the centre, and then there were those stripes to consider. 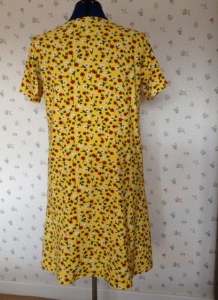 So the fabric sat on the lounge floor for a couple of days whilst i pondered even further, and played a few games of pattern piece jigsaw, with the added complication that there was a printing fault (smudge) which I wanted to avoid.!

Is it just me, or does everyone go through this process from time to time?

And then eventually you think that the fabric can’t sit on the lounge floor for ever, and I’ve pretty much decided that I want a Coco, and I can get yet another Lark out of the other side of the fabric, so just go for it, even if the stripes are not in the centre of the laid out pattern pieces. Probably no-one will notice.

So just one more point – Coco doesn’t come with a short sleeve version. Which is why I have called this Summer Coco. Its got short sleeves, and a neck band. And was, of course, easy to make, mainly on the newly serviced over-locker.

In fact, during the course of making these two, I have discovered a really useful stitch on my new sewing machine. Its the stretch stitch with the needle set to the left, which happens to be just the width of the overlocker stitching, and is brilliant for fixing the neckband in place on the outside instead of using a twin needle. (Janome 230DC, stitch 06, zigzag width 1.0 and length 2.5) I’ve also been playing with alternative stitches for hemming, and both a stitched with a 3 stage zigzag (stitch 08, using either a width of 5.0 or 3.0). In particular on the Coco, it gives a bit of bounce to the hem, which I like.

I’m losing count of Larks. I think that is 6 now, all quite different!

On a slightly different note, somehow its easier to make summer clothes than winter clothes. Do you agree? So I have a summer wardrobe bursting with clothes, and have been making a determined effort to wear as many as possible during what’s turning out to be a rather good summer. I didn’t actually own a t-shirt dress until today, but I confess that there are at least two outfits that I still haven’t worn this summer. I suspect that with the addition of a really wearable t-shirt dress that might remain the case for a while yet. Oh dear.