More Marcy Tilton….. This time I am trying out V9317, having waited for much of the spring for the pattern to be released in the UK. I’ve been pleasantly surprised by this garment, made from a cotton linen mix bought at Barry’s, and have worn it quite a lot. Its cool, different and comfortable. Which I what I have come to expect from Marcy Tilton. 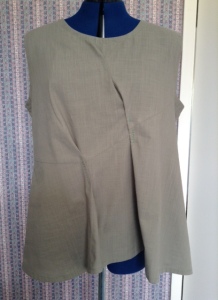 As is often the case with Marcy’s designs, you need your head in gear when you are planning your fabric layout. And mine wasn’t quite in gear! Sleeved and sleeveless have different pieces because of the armhole shapes, and there are two lengths associated with the lower pieces. With a non-engaged brain, its possible to fix the length of the bottom sections, by just cutting off the lower part, but if you select the wrong top sections, then you need to go with whatever armhole size you have cut. In my case, although I cut the sleeves, the armholes were for sleeveless, so it was a sleeveless version that I made. Does that all make sense? 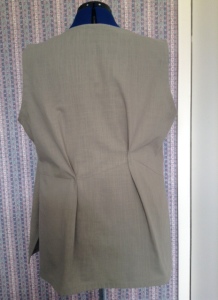 The shorter length is plenty long enough – the long version would be almost dress length on me and would probably look a bit odd.

My fabric was 140cm, which isn’t a prescribed layout width, and I found two mistakes in the pattern pieces and layout suggestions. This time my head was in gear. They were mistakes…. So it was pattern piece jigsaw time again.

The single layer cut out, which again, is quite normal for Marcy’s patterns, made marking quite easy, which is lucky, because there is a lot of it. Often you would do the shaping first, darts etc, but in this case the shaping is done when the base garment is constructed, which means the twists and tucks can be used to get the fit right. In this respect the marks are a guide to the direction and placing of the twists and tucks, and I advise you stick with Marcy’s intentions, but they can be bigger or smaller as suits your required shaping. It take a while to ‘get’, but once you get it, it works.

The garments is quite easy to make. Piece 1 attaches to piece 2, 3 to 4, 5 to 6 and so on. Then you stitch the vertical seams and find you have a garment that just needs a bit of shaping. I handstitched the neck and armhole bands, as there isn’t much space for machine stitching. It would be possible to use purchased bias binding instead of the cross-way strips (as I was taught to call them at school). 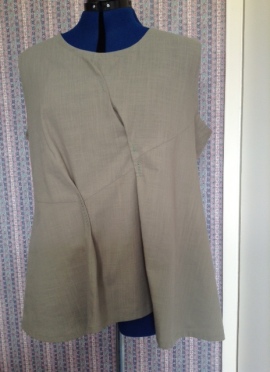 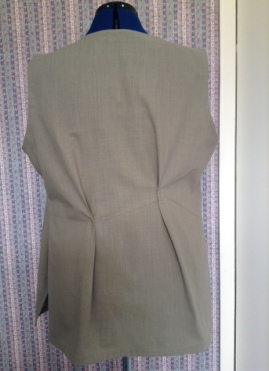 Then the garment went onto my dressmakers dummy, I engaged brain, and started to work on the twist and tucks. Now I’ve done it once, I think the next one should be straightforward. I have some airtex jersey lined up for a sleeved version. Just need to cut the right pieces! Watch this space!

You can stich the twists and tucks in place by whatever means you chose. Marcy makes a few suggestions, but they didn’t include using a decorative stitch on my new machine. In fact, I did think about using a different coloured thread to highlight the design features, but chickened out. I dare you to do it! 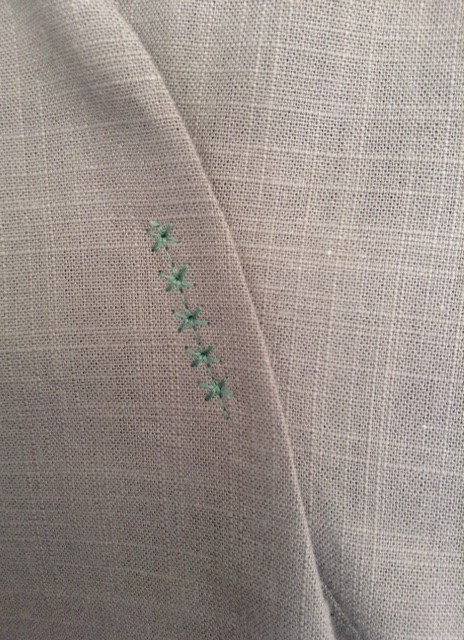 Having used a cotton / linen mix, I did wonder how it would come out of the wash, and although we sewers have to have an inclination to iron, would it be sufficient to iron the twists and tucks back into place on a linen mix version? Answer: Yes! It irons quite easily, it wears quite easily. A success I would say.

The cooler weather version will follow soon…. (Fabric bought with birthday present money, which is why I am so sure about this).

3 comments on “Twists and Tucks”