Velvet for a winter wedding

In millions of years of sewing, I don’t think that I have ever sewn with velvet before. Its one of the fabrics of the season, and will look smart at a winter wedding. After some changes of mind (in another blog post sometime), I chose Vogue 9339 for the jacket, along with The Maker’s Atelier pencil skirt. I have two such skirts already and they look very smart and are incredibly easy to make. Both fabrics are from B&M Fabrics in Leeds.

I know that the groom has plans for a grey and green combination for himself and his enterage, so when faced with a range of colours, I chose to join him. 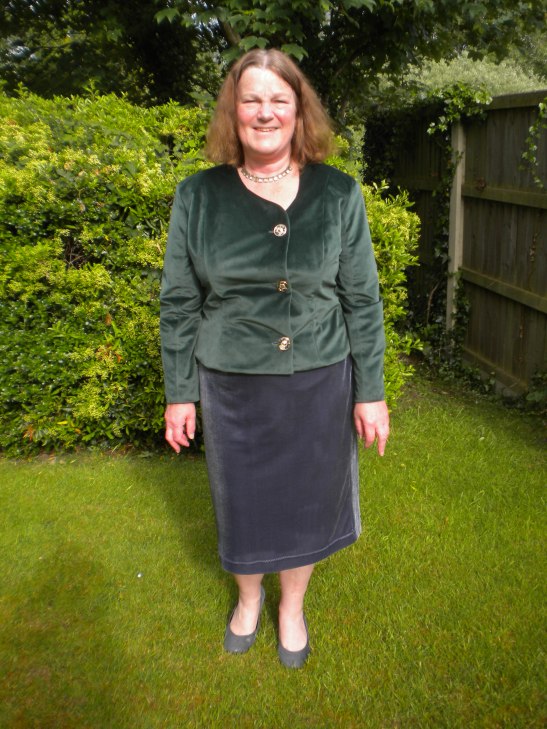 The sewing press is full of ‘master classes’ in sewing with velvet at the moment, so I proceeded cautiously, having understood that care was needed.

I generally cut with the same nap whatever I am sewing; the layout ensured that the same nap was used throughout. So far so good.

I tested everything, especially as I was planning to use the walking foot, so that all the layers would stay together. There are three; fabric, interfacing and lining.

The fabric turned out to be very tolerant of sewing machine feet, recovering nicely, even from the button hole foot. My original expectation was that I would have to use press studs to fasten the jacket, and then put decorative buttons on the outside, but I was pleasantly surprised to find that a machine-made button hole worked fine, and although my foot didn’t expand to the size of the buttons, I could still get the buttons through a slightly smaller hole, using the foot fully expanded. My new machine is so much better at button holes! Buttons from Birmingham market – does anywhere else sell buttons?

Having taken great care with the fabric, I paid less attention to the asymmetrical pattern. I mean, I know how to make a jacket! So as it was getting dark one afternoon, I stitched the two fronts to the wrong sides, and carefully steamed all the seams. Luckily I wanted to hang the smart looking fronts on my tailor’s dummy, and, oh dear!, they were the wrong way round. If I make a mistake, I like to fix it promptly, but I was about to go out. It was only after a couple of glasses of wine that I managed to get the right pieces pinned to one another. (As a rule, I never drink alcohol when I am sewing; tea, yes, of course! Using machinery under the influence and all that…. But this time, only alcohol seemed to be able to work out which way round everything should be.)

The skirt is from stretch velvet. It is much lighter weight than than the jacket. It took about 1.5 hours to make from changing the thread on the overlocker, to giving it a final press/ steam. Then I went out and bought an underskirt to wear with it, which cost twice as much as the skirt itself. BOUGHT clothes! What are they?

Whilst I have worn the skirt a few times in the last year, I have only ever worn the jacket once; at the wedding. But I was really pleased with it, as the colour exactly matched the bridesmaid’s dresses. Bingo! An excellent design choice!