Or is it a jacket? I’ve seen it described as both. I think it’s a blouse.

I finished it yesterday and almost kept it on for the rest of the day, except that some gardening called, and its not really suitable for wearing for gardening!

I got the pattern in the half price sale, so the whole blouse has cost me about £20. Not bad. On the face of it, it would seem to be a relatively easy pattern, but in some ways, it isn’t. There is some fiddliness with both the pockets, and the sleeves, especially as I think there is a mistake in the sleeve pattern. 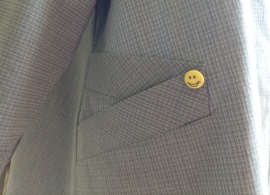 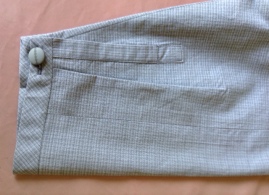 The instructions are correct, but what they describe is not what appears in the pattern markings. I had made up one sleeve as per the markings, to the point where I realised that the instructions made sense, but the marking didn’t. But as this involves slashing the fabric in a different place, I had to cut a new sleeve back piece. The correct result is quite slick.

I had shortened everything by 5cm. This is about right for the sleeves, and quite normal that I shorten sleeves by about that much. The bodice is fine as it is, but I could have shortened it a little bit more – maybe another 2 cm.

The fabric was bought online from Fabworks. I knew they had a good supply of shirting, which is one of the recommended fabrics. It will crease when I sit down in the blouse. Conscious that I seem to have a preference for patterned fabric, I deliberately wanted a relatively plain fabric, so that the blouse would go with a wide range of bottoms. Whilst it might appear to be plain grey, it has a mild khaki green woven through it, and a very slightly raised check pattern (basket weave), which makes the pocket facings and cuffs, which are cut on the cross, stand out. 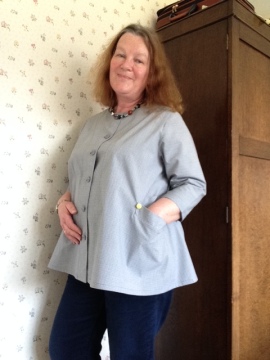 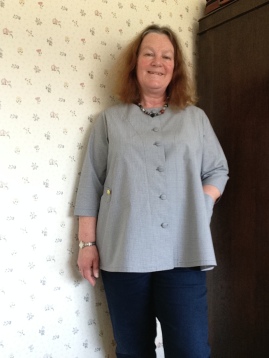 The front and cuff buttons were bought on Birmingham market just before it closed down. Which meant that when I noticed that in the pattern photo, one of the versions uses a button to hold down the pocket welt, I couldn’t go back and buy more buttons. For the time being I have attached my two remaining yellow smiley face buttons. They add a pop of happy colour! But I think that longer term I will probably replace them with more sombre self covered buttons, which will disappear into the fabric.

I probably won’t make another. The season for 3/4 length sleeve cotton blouses is quite short, and I have a number of others.