I browse through Sew Today whenever it arrives, thinking i am going to buy this pattern or that pattern, and then i consider that i already have a pattern a bit similar, or that i have made something similar and rarely wear it. And then i don’t buy. I wonder how many patterns i have got…. 60, 70, 80? Probably that sort of scale. Or more! 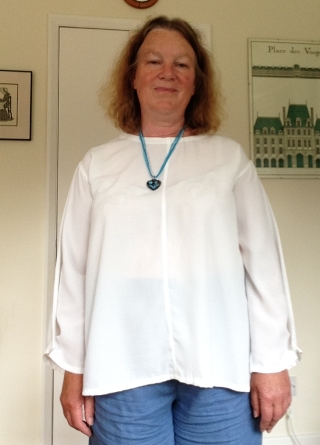 Anyway, needless to say that after a few days of admiring this pattern, i bought it. Primarily for the top. Whilst the shape would be very wearable, i may have been swayed by the plain but interesting fabric used in the photo shoot. That would suit me very well: plain, interesting and wearable.

I was sure that i was going to make the buttoned sleeve version, as i have nothing else like that, and in fact, that was its first compliment; “I like the sleeves”. As a teenager of the 70s, this is ’round 2′ of flounced and puffed sleeves for me. Whilst i have made some flounced sleeves recently, they can be a bit impractical when you need to cover up, like when you end up sitting outside the pub on a cool evening. See my next post! So the buttoned variety would be different and a bit more practical.

I considered the asymmetric version too. I suppose that the main reason that i went for symmetrical, was because i could cut it out on the fold, on the table. Keeping the fabric rectangular, finding the straight grain whilst cutting out a single layer on the floor was, well, too much like hard work! And the single length pieces were as long as i wanted the garment to be, so single length won the day.

We might have ‘bricks and mortar’ fabric stores again, but now is not the time to be traipsing round store after store, so i found some plain but interesting fabric in Barry’s and bought it. Fabric decision made. I had some plain, suitable buttons in the magic button box. It is a magic box; i seem to have no control over its contents, but it keeps delivering!

So now the final decision; how to finish the seams? The base choices seemed to be between french and flat felled. So i tested. The french seam still had some ‘bounce’, and i wanted something flatter. Proper flat felled seams involve fiddling with quite small margins of fabric, and this fabric frays quite easy, so fiddling with small margins of fraying fabric didn’t seem like a good idea. So i mainly did what you could call, ‘cheating flat felled seams’, which was to sew the seam, then overlock the edges together, and stitch down the overlocked edge.

It is fastened at the back with a rouleaux loop made from the neck bias binding, and a different button from the magic box. It will slip over my head without undoing the button, so you might get away with a full seam at the back, but you wouldn’t know until you had stitched it! 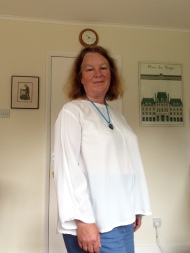 The result is very easy to wear, easy to wash and looks as if it will travel well (oh to be able to test out that assumption!) But, going back to where i started this post, i have a number of tops of a similar weight, so time will test how well it manages to complete with the others for wear time………