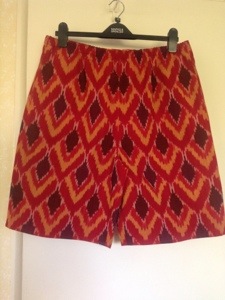 I bought the material with a vague idea that I might make trousers with it. Several ideas circulated before I finally decided that a pair of short trousers was indeed the best use of it. This was after I had pinned out a skirt, but hesitated to cut. And talking of cutting, that is indeed the clever part of this garment. I did deliberately cut it to match all round, and I have succeeded. The back is good as well.
It took me 4 attempts to pull through the elastic. I’m not totally sure why because when I tried it the opposite way it was much easier. It must have been something to do with the way that the seams were lying.
Now this is not the sort of garment that I could inconspicuously wear to walk through central Birmingham. First, we don’t get the weather very often, and secondly, they are not inconspicuous! So they are holiday shorts. I trust that the inhabitants if Kathmandu and Llasa will appreciate them!

This entry was posted on April 27, 2013 by ann hebden in Fashion, Trousers and tagged Trousers.