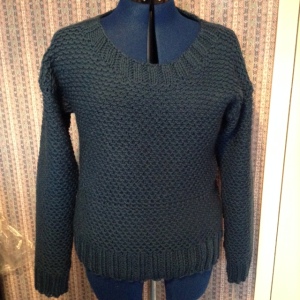 I’ve been knitting again. I am still very much a beginner, but I don’t need any cafetiere or hot water bottle covers, so I am knitting ‘easy’ jumpers.

The pattern and wool are from Birmingham’s new John Lewis store. Hence, this is quite an expensive make. In general I am pleased with it and have enjoyed knitting it – but the sleeves are a bit long, which will limit its day to day wear.

As with my previous knit, I forgot to change the needle size after the ribbed band on the back, so deliberaltely did the same thing on the front. I got it right on both sleeves! I don’t think it matters.

I made copious notes about my progress with the 4 row pattern, always aiming to finish any work on the 4th row. I can see a row that it wrong, and you will be able to as well, if you look closely. I don’t know how that happened, as I thought I was fastidious with the notes. I think it happened when I finished for a day, when I have found that I have a habit of not updating my notes as I gather together my knitting bits and store them for the night. I don’t think that matters either!

I managed to keep my head together as I shaped the right side round the neck, but had real trouble getting my head round doing it all the other way round on the left side. I must have unravelled the left side about 3 times back to the re-joined wool.  I found it helped when I drew out what I needed to do. But I think I have managed to finish the jumper with very little evidence of the problems that I had in this area.

I read the pattern wrong before doing the neck band, but i’m actually pleased that I did…. I sewed up both the left and right shoulder seams, probably influenced by the fact that I was doing the same thing on a dress that I had been sewing earlier in the day.

How to knit the neck band? especially as I have read blogs and books that talk about picking up stitched being a scary process – maybe like setting in sleeves for a sewist, which, i’m pleased to say, I don’t find scary. That fact encourages me. The neck band knitting was made all the more puzzling as I had sewn both shoulders together and therefore had a round object that would clearly be a problem to knit on straight needles. So off I went to my chief source of advice for knitting matters – the staff at Guthrie-Ghani (Thanks Rachael)- and came out with suitably sized needles for knitting in the round. And here is the result, of which I am really proud!

Again I drew a picture of the stitches to be picked up, and marked off the edges into groups of 5 – 6 stitches. Then, keeping the first stitch marked, I just knitted in the round until it was long enough. Great – no seams and it didn’t take very long. I will happily make the same mistake again!

The sleeves were simple to knit and I don’t think that I made any mistakes, other than to knit them too long. Anyway, lesson learnt. I will check the sleeve length on future makes. I’m presuming that there is very little that I can do about it now.

I recommend this pattern for enthusiastic beginners. I grows quickly. You can tell fairly easily if you have made a mistake with the pattern, and there aren’t any scary stitches. It’s all just knit and purl and lots of slipping, but hey! that’s easy.