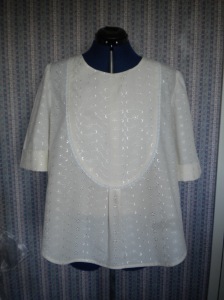 More sewing for my forthcoming holiday.

It all started with this piece of broderie anglais trimming, which you may have noticed, doesn’t feature in the finished garment! That’s the way that it is sometimes!

The fabric, purchased from Abakhan in Liverpool (whilst visiting for new year) matches the trimming exactly. More sewing good luck – I drew a button and won a £5 voucher, which I duly spent on wool downstairs. Returning home, I found that there is about 3″ less trimming than the length of the edge of the bib. I made a bit of an attempt to find more, and to be quite honest, if Birmingham Rag Market had been open on a Wednesday, I might have found some. But I had some other suitable trimming, and I wanted to get on with my sewing, so the original trimming idea was abandoned. 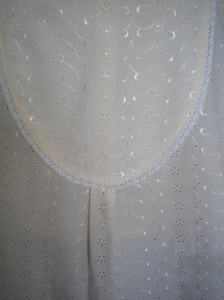 I have used this pattern once before – here. I have a strange relationship with this dress. I love the design. I’m really pleased with the finished result, but I have mainly worn it when working at home. The dress has a lot of fabric. Too much. I made a belt and only ever wear the dress with the belt. I think I probably blogged last year that I might eventually cut down the dress to tunic length. Its interesting that quite coincidentally, Katie has blogged on the Minerva Crafts blog, and been in Love Sewing Issue 22, with her version of the same pattern, adjusted to tunic length. Her version looks a little bit longer than mine.

The pattern suggests that you use the seamed bib on the outside. In order to avoid the need for pattern matching down the front, I used the fold-cut ‘facing’ for the front and the lining has the seam. It works. In a lesson learnt from the original dress, I was careful to match the pattern on the bib with the centre of the pleat, as the picture shows.

I was so pleased with the result of the tunic pattern hack that I got the dress version and cut off a full 35cm, creating another tunic – here.

So now I have no need for the belt any more, but I have two highly wearable tunics for the holidays.

Its such a versatile pattern and nicely finished. I am currently pondering a winter version, but wondering what to do about the length and amount of fabric…… as usual, watch this space.