It’s best to use a simple pattern when its the fabric that is the story of the garment. So here is my simplest top pattern, Butterick 5948,  and the story about the fabric.

It is by far the oldest fabric I have used in recent years, having bought it in Mumbai before I replaced my sewing machine and started sewing again. It was a present for my Mum. I think it was either bought in 2001 or 2003, and I’m pleased to say that it has survived two house moves, albeit, remaining unused. The ‘trouble’ is that it is sari fabric, and there is a gradation of the background fabric colour across the width of the fabric, and I don’t think that Mum knew how to cope with that, despite being an accomplished sewer herself. 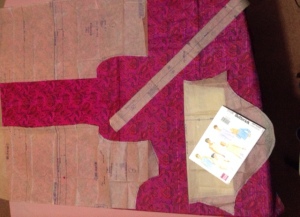 So the top is cut on the cross grain, and I spent some time thinking about where to position the pieces to get a sensible looking garment. I aimed to move into the deeper colouring zone round about the chest, and then cut the sleeves out of the deeper tone.

You may have noticed that I like creating fastenings from rouleaux loops and self covered buttons, and that’s what I did here.

So this is for Mum. She hasn’t seen it as I write this, and although it may appear to be unseasonal, she can probably wear it straight away since her flat is usually very warm! If only she had two nice new skirts to wear it with, but i’ll blog about that when the saga is finished. In the meantime, let me just say to be wary about the Simple Sew Sophie skirt pattern. …..