Sew Style Dressmaker seems to be a collection of free patterns from recent editions of Sew magazine, along with three more free patterns. For £9.99 that’s not bad value, as long as you make use of the patterns. I was interested in K8265, a wardrobe of knit garments. In fact, when did I last sew something that wasn’t a knit?

Barry’s has a good range of knits, including jumper fabric (and a free car park, which I find increasingly attractive now that the cost of parking in Birmingham City centre has more than doubled for under an hour…) This make is as much about trying out the fabric as the pattern. It’s all artificial fibre, washed well, dries quickly, doesn’t crease, travelled well and is warm. I feared it might itch, but it doesn’t. So all round satisfied really.

You may not have noticed, but I don’t use Simplicity patterns very often. This is partly because I get discount on McCalls Company patterns, and I like some of their designers. I’m sorry, but I perceive Simplicity to be a bit old-fashioned. It also means that I am not used to Simplicity sizing, and after my recent battle with Vogue trousers, I was scared of sizing, because quite honestly, the tape measure seems to be lying. Yes, really! After measuring everything I could find to measure, and sleeping on it….. I did what I often do, which is to cut a 16 at the bust, and grade up a size to the waist. Regardless of what the tape measure was saying. It worked! 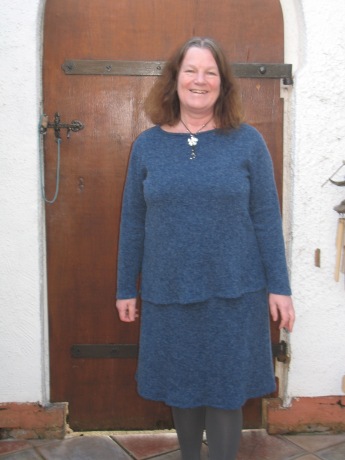 I planned this skirt. It wasn’t cut from over length fabric! There was lots of shortening going on….

Sleeve – 8 cm. (Normally about 6cm shortened on most long sleeves)

Top – 12cm. That was very deliberate. I didn’t want a long top, as that would limit the coats that I could wear with it, and it is likely that I will wear a coat with a garment from ‘woolly’ fabric like this.

I used both the sewing machine and overlocker; in fact, more sewing machine than I expected. The top side seam had to be by machine, as it is split at the bottom. In fact, I dropped the top of the split by about 6cm. The neck band was fiddly with this fabric, as it looked as if it was about to unravel, which, of course, it didn’t…. I machine stitched one side to the neck, and then turned the band and stitched the inside in place by hand. I think that folding the band, tacking it to the neckline and overlocking would have worked, but there wasn’t really any scope for it not working, so I played safe and opted for hand sewing. I also machine stitched the sleeves in place, and then finished them on the overlocker. Sometimes (like with the recent scuba top), I go straight for the overlocker when setting in knit sleeves. The sleeves fit nicely.

I think the top will get worn more than that skirt. It goes nicely with jeans, and probably several other winter skirts. And of course, will fit under several winter coats.

Thanks to my friend Laurenne for the photos. Not only does she have a back yard with some interesting back drops, but she understands me when I ask her to take shots to show off the garments. But as she lives about 130 miles away, it’ll be back to the dress form for the next lot of pictures…..

Yes, I did turn up to visit with a bag of clothes to be photographed!