A bunch of Geraniums

I knew that this pattern would be useful! Here are two more Geranium dresses. I think that’s 4 I’ve made so far.

This is the basic dress with built in capped sleeves. The pink one was this design because that’s what I wanted for the rather summery fabric. The fabric is from B&M Fabrics in Leeds, bought last summer, shortly after we found out that my great niece is a girl. The second one is made from a top that belonged to my mother, from which I could just about get a dress. Both have lined bodices, as per the pattern.

The only difference is that the pink version is gathered, and the striped version is pleated, which takes slightly less fabric. I couldn’t have got a gathered version out of the fabric. Here is it being squeezed out of the top! 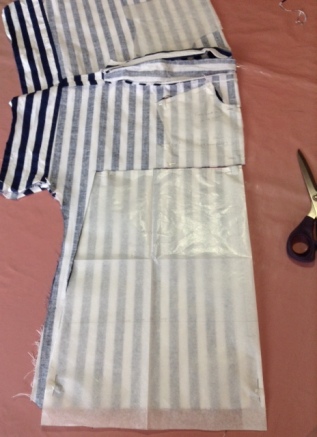 Both are fastened with buttons, rather than poppers as used on previous versions. 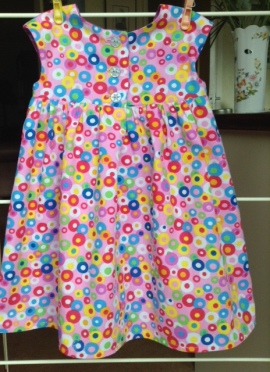 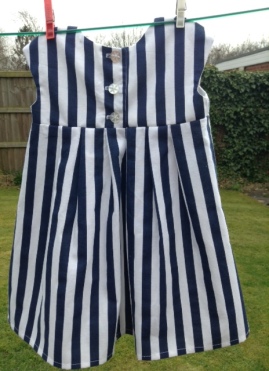 It’s not very often that I re-purpose fabric.

It took 3/4 hour to undo the side seams and hem, remove some quite heavy weight interfacing from the neckline, and then undo the sleeve cuffs and underarm seams. Then I washed the fabric and gave all of the ex-seams and hem a good press – I needed every inch of fabric!

The dress should be easy to make. This one wasn’t.

The overlocker threw one of those unexplained wobblies when finishing a seam.

The bobbin ran out 30cm from finishing the hem.

And then the buttonhole played up, so much so that I went out and bought a new sewing machine!

I have read somewhere before about someone having difficulties with a Janome button hole function. I would say that over the 6 – 7 years of relatively heavy usage of this machine, that about 50% of the button holes haven’t worked. They do a bar and backward zigzag, but never make the turn to come back. But obvioulsy that means that 50% have worked, so i obvioulsy know what to do. But the time taken unpicking the 50% that don’t work is annoying, and sometimes a delicate task.

It’s been to the menders and there is nothing wrong with it! I even bought a new button hole foot, quite recently.

Actually these buton holes were done using the basic 4 stage process on my Mum’s old sewing machine. Then i decided that machine was too basic for my requirements and went out and bought a new one.

So much for re-purposing fabric and using lace and a bow ‘from stock’. In principle that’s almost a free dress. But actually i spent a lot of money whilst making it.

I’m just hoping now that there will be summer weather at the time that my great niece is the right size for wearing the dresses. I chose 12 – 18 months, which ought to be right.