I have used Bobbins and Buttons Mary pinafore a couple of times recently. It has straps, and getting the strap length and button position right without the child present, is just luck really. And whilst it’s easy for a regular sewer to move a (self-covered) button, it doesn’t tend to be at the front of our minds when Auntie Ann pays a visit to the recipient of all these new clothes. I had problems printing the PDF pattern and ended up having to get the paper version. I’ve no idea why it didn’t print, but Julia at Bobbins and Buttons was helpful. Meet Mary. 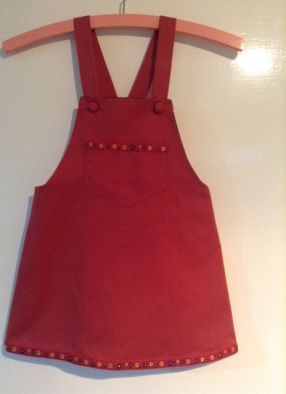 So I bought Rosie from Bobbins and Buttons (paper version) instead, in the hopes that this will be an easier design to fit, and will probably work better across the seasons. Meet Rosie * 2. 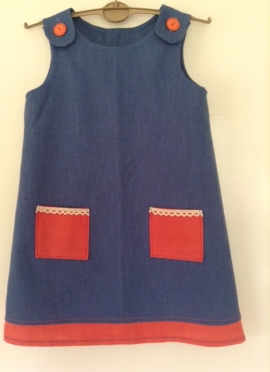 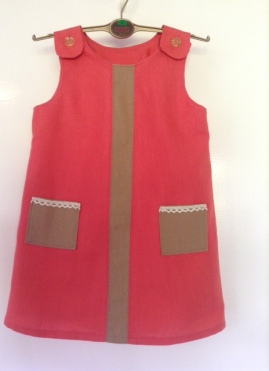 So the fabric derives from two pairs of trousers and one Holiday Top. I already had everything apart from the buttons on the blue version. The ‘attitude’ arises from a cutting error for the front piece of the orange version. Cutting the pattern piece from the  reverse side, I cut the wrong side on the fold, and so, in order to fix the matter, I had to create a design feature of a centre front contrast and matching pockets! And that set off a further bit of creativity for a second version.

The blue version uses the hem facing pattern section. I doubt I will make the reversible version. Somehow the idea of having spilt ice cream down the front, and then turning it inside out to get a clean front facing garment, seems wrong! OK; the pattern doesn’t mention anything about spilling ice cream. But i’d rather make two dresses. Anyway, I cant make out how the hem facing is meant to work, joining the front and back dresses, but I wont need to. I joined the facing piece to the hem about 3 cm above the raw edge; where it fitted properly. There is decorative zigzag hemming on both the blue and orange hems. 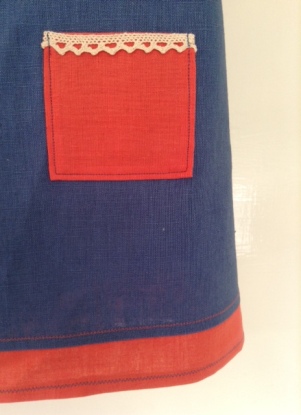 In fact, I had cut and decorated these pockets for the orange version, and then when I discovered the cutting error, I concluded that I had to create another version round the pockets that were already made! I had the trimming in stock. I think it was free with a magazine some time ago.

There will be more Rosies. Definitely. I like to re-use my children’s patterns. I can picture both chambray and needlecord for colder days.

To note that I have recently had difficulty printing another PDF pattern. The pattern itself I sent to netprinter.co.uk. But I can’t print the instructions on A4. I’d be pleased to hear from anyone who can explain what the problem might be.