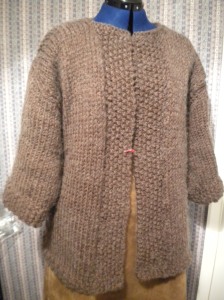 My first ever adult garment knitted by following a pattern!

My quest for slower sewing has brought me to knitting. I was never a great knitter in the past. My teenage repertoire was limited to scarves and the ocassional set of baby booties, but I never attempted anything as large as this.

Back in September I bought a knitting magazine with some free wool and needles and did this :- 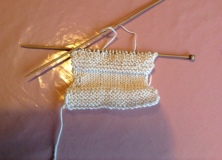 A bit of knit, a bit of purl, some increasing and some decreasing.

Needless to say, there are two of them. knitted in the round using a magic loop. But apart from working out how to create the thumb hole in a tidy fashion, it wasn’t difficult knitting. In fact, I have made four altogether.

So then I embarked on the jacket above. I’m wearing it right now. It is my central heating on a winter’s afternoon, although its going to take quite a while to save the cost of the wool in heating bills.

It is Rico creative twist super chunky jacket; pattern, wool and some advice, all from Guthrie Ghani. I bought the wool at the SewBrum event of 30th October and completed the garment a month later. Obviously super chunky grows quickly which is why I selected this weight of wool.

Everyone that that I spoke to (except a magazine article that I read) advised to use the wool as recommended by the pattern, thus ensuring that it knitted up as designed. That made the cost of the jacket round about £60 (with SewBrum discount) and of course I had to purchase needles, stitch holders, stitch markers and wool needles as the need arose. So the whole thing probably cost more than something similar in the shops.

After much debate I opted to add a loop and button, although it took me while to work out the best way of creating a loop and attaching it to the front. Eventually all I did was to wind two strands of wool together whilst anchoring them to the edge of the front, winding the wool round the button as I did so. 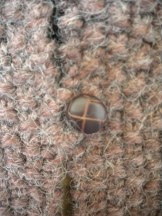 I have also knitted quite a big size, based on body measurements, and in all but one respect I am happy with the size – but, the sleeves are very wide. So wide that they will not comfortably fit under my new raincoat, and if they wont fit under that, then they probably wont fit under any coat. Hence, it becomes either an indoor jacket for cold days, or an outdoor jacket for dry autumn and spring days – and that’s when the loop and button will be of use.

Of course I have learnt many lessons, so for any novice knitters reading, here are a few of them:

Thanks for reading this, and watch out for the next piece of knitting. It’s equally as expensive, and also started on the wrong sized needles!!