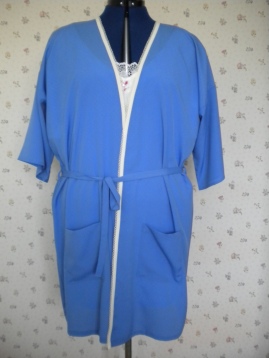 This is another use of my Butterick night wear pattern, so it’s getting to be good value for money now!

It’s pretty much the same as the ‘Executive Nightdress’, as I chose to call it, except the fabric is quite different and I lengthened and evened out the front hem a bit, and shortened the sleeves. The fabric had been sitting in my cupboard since January 2nd. I know this, because I dragged my friends in Liverpool into Abakhan, as soon as it opened in the new year. I bought two lots of fabric, and I intended to make two tunics to take abroad. But I only made one.

Once I had got this fabric home and washed it, I realised that it is that awful crinkly fabric, where you can’t find a grain (but it probably doesn’t matter), but worse than that, it expands from tight fitting to very loose fitting, at will. I had a top made from it, which went to the charity shop ages ago.

So the fabric sat in the cupboard waiting for a suitable idea to emerge. And after I had completed the jersey version of the night dress, an idea did emerge. It wouldn’t really matter if the fabric was in tight fitting, or loose fitting mode, if I was sleeping in it!

Making up techniques were very similar to the last one, even as far as using the same lace at the front. Again I deliberately stitched a label through all facing layers at the back, and have added a flower motive to the front to help keep the front facing in place.

And it’s been too cold to wear it since it was finished, so I haven’t yet experienced it’s changing moods. Being crinkly, it ought to travel ok, which is one place where the next idea started….

Actually, we need to go back to last October, and SewBrum, when I won some sequinned fabric in the raffle. It has been sitting in the cupboard alongside the crinkly stuff, although I have always had an idea, but not the pattern or the patience.

I’ve never sewn with sequins before, and knowing that you have to remove them along cutting out and seam lines, I decided that a simple pattern was essential, and that probably meant a light weight summer kimono. So eventually I grabbed the bull by the horns and decided on a kimono pattern (having rejected several during the course of the last few months).

Quite straightforward, I thought, and found by simply searching for a ‘kimono pattern’ online, despite much searching of SewDirect, when it didn’t show up.

But then I decided that whilst I was travelling with my new summer nightdress, I could do with a new summer dressing gown, and why not try out the kimono pattern as a dressing gown first?

(Lesson learnt : I have just ordered a loose fitting Marcy Tilton pattern, but ordered the smaller size range, so that I can more easily grade when I see the pattern pieces.)

The fabric is polyester, but seems to scrunch up and out OK, and drapes nicely for a dressing gown. It in the sale at Guthrie Ghani at £4 per metre, so this was not very expensive. I added a belt and three rouleaux loops – 2 at the sides to hold the belt, and one at the centre back to hang it on the bedroom door.

Slightly sideways view showing belt and loop
I still can’t decide whether this was a pain to sew or not. I used French seams, sewing the sleeves in flat, which meant that I needed to get round a right angle curve when I sewed the sleeve and side seam together. This is not what the pattern instructions said, but you will have gathered that I often sew ‘off pattern’. I managed to straighten out the underarm curve and the seams look very neat. But I had a lot of trouble with missing stitches, from time to time, and eventually, half way round the bottom hem, my thread snapped and I could not get good stitches any more. I re-threaded everything, I dusted out the area beneath the plate, I changed the needle 3 times…. At first it was stitching OK on a cotton sample, but in the end it gave up on cotton as well.

So off I went to Frank Nutt in Kings Heath, who, as they have been previously, were very helpful, and diagnosed a damaged needle. So I bought a whole new set of needles, and threw out everything that I already had. I change my needles regularly depending upon what I am sewing, but then I put them back into the packet ready for next time. So I have no idea which needles are much used, and whether I have any that have never been used. So they all had to go. And since I have been back home, the polyster has stitched OK, and so have jersey and denim.

And one more part of this tale – I could only get an off-white folded lace bias binding on the market, but I had wanted to put a little white bow on each pocket. So I tried to dye the satin bows in tea. I knew I needed a mordant to make the colour stick, but had no idea whether I might have a suitable mordant in my kitchen cupboard. Luckily, Charlotte, at English Girl at Home, knows all about dyeing, and she was out at the Midlands Sewsocialist event this week. The answer is ‘no’, I do not have a suitable mordant in my kitchen cupboard. So no little white bows, whether tea stained or washed clean!

So the upshot of this, is that I am still not sure whether I want to use this pattern for the sequinned fabric or not, but I have a travel-friendly summer night wear set!