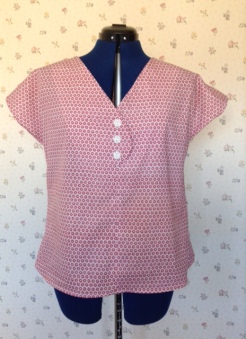 This is my third version of Jennifer Lauren’s Afternoon blouse – the daisy version!

The others are here and here. The beige one is very wearable, but the blue satin one went to the charity shop without being worn. I guess that I knew nothing about ‘Frozen’ when I bought the fabric.

This one is created from left over fabric from the Chelsea collection blouse. I wasn’t very impressed that there was any left over fabric let alone enough for a second blouse, but the blouse is rather nice. I don’t know if it took an afternoon to make, but it took an hour here and 1/2 hour there, over a period of about 2 days, and then it was finished. The hardest part was lining up the centre front seam both to cut and to sew, so that it matched. I haven’t made a perfect job of it, and I suspect that it was the cutting that was slightly out, rather than the sewing.

I think that the fun of Afternoon blouses is not so much in the sewing, as in the decoration at the front ‘fastening’. I had these three ‘daisy’ buttons in stock, and they contrast with the fabric quite nicely. I also think that lining up three of them makes them look more like fastenings when in fact, they are purely decorative.

And they are also appropriate – after a somewhat longer period of ‘play’ as opposed to ‘work’, I will be returning to work tomorrow, for Daisy Group. Actually, its my old employers, so I am quite excited about it. The implication of this being that I probably won’t be sewing so much in the coming weeks, but I will be wearing some of my smarter garments which have been waiting for this moment for too many weeks!